Mercy Riders to the Rescue - Vol 2

We settled on staying at Baron's Creekside in Fredericksburg. We wanted to stay in the romantic log cabins crafted from 200-year-old timber from a Swiss barn, but they didn't have two available or one that could hold two couples, so we settled for the Victorian, a quaint little house that had been relocated from its original Main Street location. The Baron's Creekside B&B is owned by a Swiss national who stumbled upon the Texas Hill Country and now splits his time between his homes in Switzerland and Texas.

We agreed to meet at the B&B around noon, then would spend Thursday making the Willow City Loop and spending the evening in Luckenbach. Friday was reserved for running the Three Twisted Sisters, and on Saturday, we were headed to the San Marcos area to take in some of the festivities at the Texas State HOG Rally. Scott reserved his bike rental and everything things was set.

As the week of the trip approached, so did the clouds. Seems even the threat of the Mercy Riders coming to town causes the weather gods to bring their game. In the past five days, several inches of rain had fallen and more was on the way. The 10-day outlook indicated thunderstorms on three of the four days of the trip. Not bad odds when you're riding with Scott and Karen, but a concern nonetheless. By Monday evening, the threat of rain was only building, we now had a 20% chance of rain on the remaining "dry" day. Considering the cost of the bike rental and the additional air fare to bring Karen down, plus the already sunk deposit for the B&B, Scott began to question the trip.  A few showers along the way were tolerable, but four days of riding in the rain was a little much. We agreed to make the final call on Tuesday evening.

While the locals claimed the weather was "goin' round Fredericksburg", weather.com continued to indicate rain most of the weekend. So the Mercy Riders decided to back-out. Within 24-hours, the weather gods acknowledged their decision and parted the clouds. The revised forecast showed rain on Thursday only. Liz and I decided to make the trip anyway and began looking for someone to fill the open bedroom.

Enter my buddy Bill, aka "Iron Butt". Bill decided he'd join us for the night, riding down from the Dallas/Fort Worth area on Thursday, only to return Friday evening. That's over 1,200 miles in less than 48 hours!! We were honored to have him there.

True to forecast, we had a few showers on Thursday, but that didn't stop us from holding a beer summit at the 11th Street Cowboy Bar in Bandera and taking a run over to Luckenbach, Texas. The Luckenbach visit was a hoot. As best I can recall, Kent Finlay was leading the picker's circle that evening and the music was great. We spent most of our time sitting under the rooster tree talking - rather laughing - with Walt Perryman, who is also known as The Cowboy Poet.

Walt has an interesting way of telling his life's stories and every single one of them is true - he swears! If you ever get the chance to hear him, do so. But please, PLEASE...don't ask him about the little puppy he had as a kid unless you have some tissue nearby cuz you'll laugh till you cry! 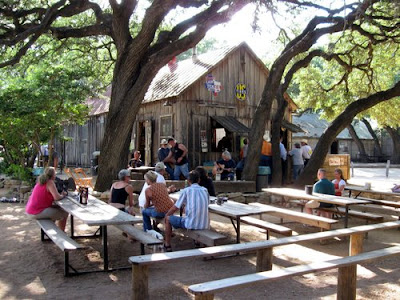 The Rooster Tree - Luckenbach, Texas
Photo by Ralph Wranker
Now, you may have caught my reference to the rooster tree earlier. Seems Luckenbach has more fowl than folk. So many that the hens and roosters run free-range style. These birds of feather are quite colorful and apparantly, have learned to mimic the lonely cowboys that come in off the local ranches. Put bluntly, it seems the roosters are eager to screw anything that walks around on two (chicken) legs and don't mind doing so right there in the middle of the crowd. Anyway, the bar sits under a HUGE oak tree that provides shade for the temporary residents of Luckenbach and the fowl like to jump on the picnic tables, then up to the tree to watch the crowds. A word of warning to the wise, if you're lookin' up at the chickens, do so with your mouth shut. Likewise, it's a good idea to keep your beer covered as well.

Just ask Walt, he has a story 'bout that too...