I've lived in several regions in Texas. But as an adult, I've always had a soft spot in my heart for the Texas Hill Country. There is just something about the semi-arid terrain, the wicked looking oak trees, the people, the music, the BBQ, and...the rolling, twisty roads.

So when wildflower season comes along, what better excuse is needed! Given a relatively wet fall, this was hyped to be a banner season in wildflower production. But the lack of spring rain seems to have put a damper on Mother Nature's plans. Nonetheless, it was worth a trip down to see what's going on in the Hills. This trip was also intended to serve as a warm-up to a planned Great Southwest Tour (17 days / 4,200 miles)  that will take place in early May.

My bride and I departed on Tuesday, April 10, for a three day tour on what I call the Texas Wildflower Trail. On the way down, we took a late lunch break at Louie Mueller BBQ in Taylor. Much to our surprise, the meats were a little disappointing this time around. The brisket was fatty (despite asking for the lean portion) and the pulled pork was dry. Perhaps it was because we were at the tail-end of the lunch run. Perhaps it was just coincidence. Perhaps they just had an off day in the smoker. Perhaps we'll try another eatery next time through.

After lunch, we took the slab around Round Rock to avoid the in-town traffic. Once on the west side of town, we took FM-1431 out to Marble Falls which we used as a base camp for two nights. We covered 270 miles for the day and were ready for Happy Hour by the pool, followed by a burger and early bedtime.

After breakfast, we departed the hotel in 50 degree temps which quickly rose to 70 degrees by Noon. To get the tires warm, we took FM-2147 around the southern edge of Lake LBJ, going by Horseshoe Bay and the many other resort communities that have been built to cater to the weekend and retired crowd. After a short jaunt on TX-71, we then took FM-962 (and several other county and FM roads) as a back road approach to our first destination, the Willow City Loop.

In the +20 years we've been coming to the Hill Country on the bike, we have driven by the Willow City Loop countless times, never taking the time to see what it had to offer. The loop is essentially a narrow road that meanders through perhaps 100's of ranchettes surrounding Willow City and provides spectacular views of flower-filled meadows and valleys on its 13-mile trek. The place is a "must see" especially in the Springtime.

There are no shoulders and all of the land is privately owned, so travelers are discouraged from pulling over and getting out. But it's impossible to resist the temptation, so we just parked on the road! 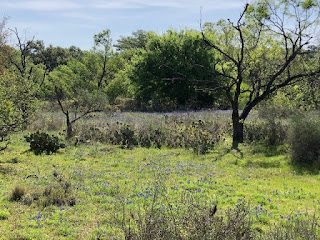 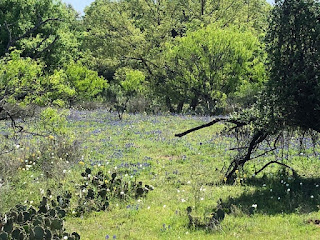 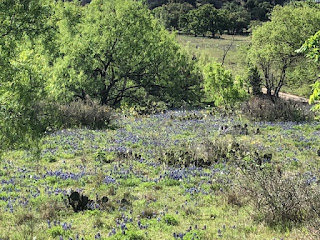 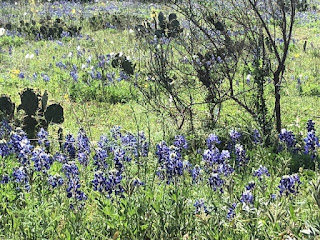 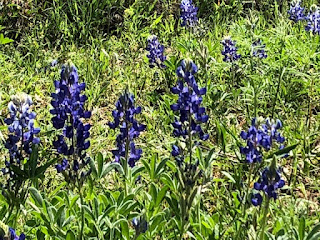 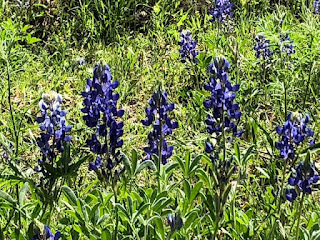 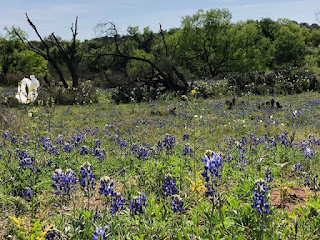 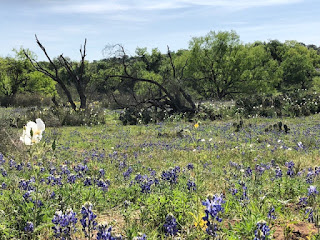 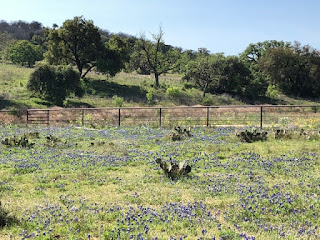 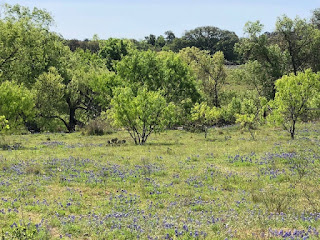 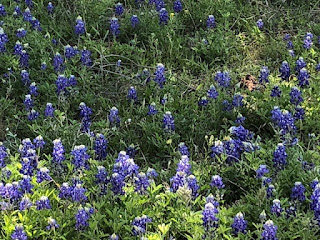 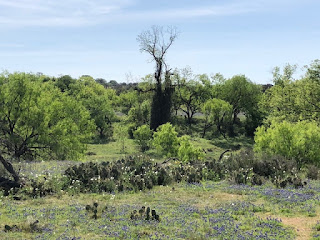 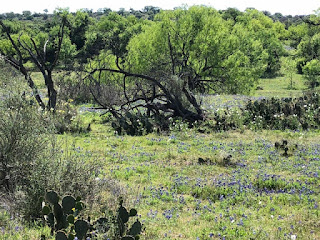 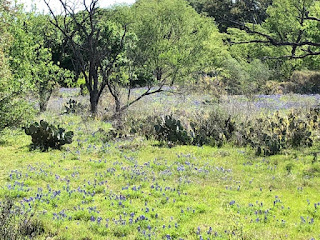 The northeast section of the loop has a pronounced elevation change, providing a view of a rustic "mountain" ridge and once at the top, a spectacular view of the valley below. We didn't have a decent place to stop once at the top, but did capture some pics of the ridge. 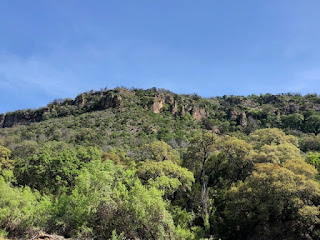 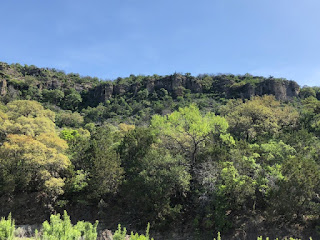 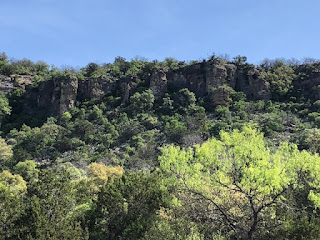 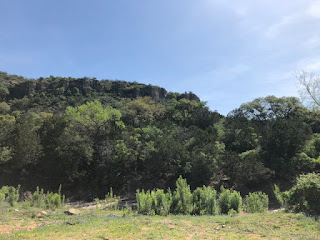 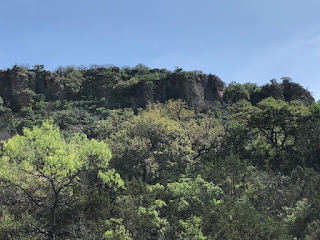 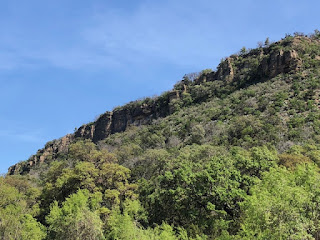 Once we completed our tour of the Willow City Loop, we headed north on TX-16 to Llano. We were tempted to stop at Coopers BBQ, but the line was too long, so we opted to continue on to Mason. Mason has a smaller Coopers BBQ venue, but also has a well-ranked down-home restaurant on the town square, called the Square Plate, that threw-down some tasty German vittles Texas-style. 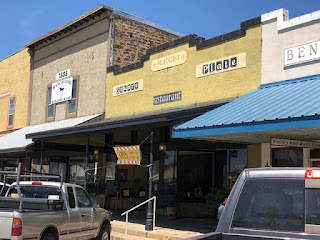 Mason is a small ranching community that was originally founded as Fort Mason, a safe place for travelers while travelling through Apache and Comanche territory in the 1800's. The German heritage of the founders is evident in the architecture, churches, culture, and food...even today. It's not a big place, but the people are real friendly. 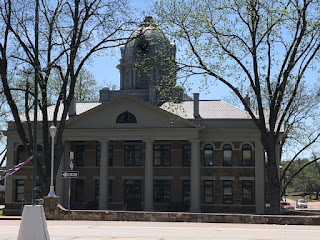 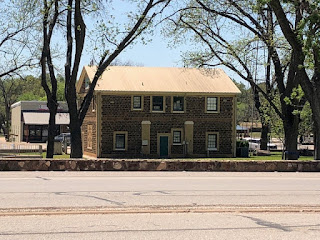 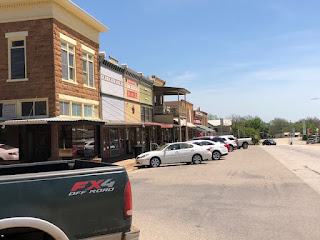 Of course, no trip to the Hill Country is complete without a stop in Luckenbach. We arrived late afternoon with the hootin' and hollarin' and singin' already underway. There were a half dozen bikes parked in the lot, along with a tour bus and several cars - probably a crowd of 50 or so. Not bad for a Wednesday afternoon in mid-April. The beer was flowing, the crowd was singin', and the roosters crowing. I sometimes wonder if those roosters aren't trained to crow at just the right time when the artist(s) is singing "Let's go to Luckenbach Texas". 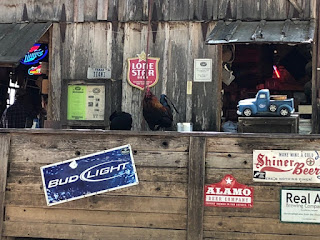 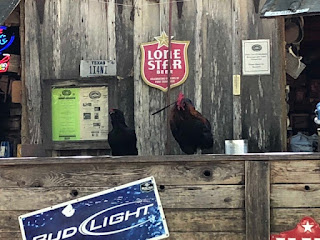 After catching and releasing our beer, we headed back to the hotel for our own private Happy Hour. We took the back roads and FM-1320 east of Fredericksburg was wildflower heaven...but we didn't stop for pics! 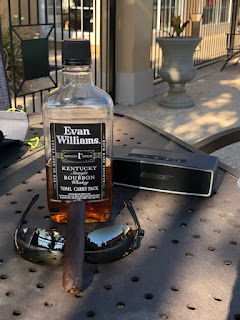 Another Hill Country mainstay is the Blue Bonnet Cafe in Marble Falls. Since 1929, the Blue Bonnet Cafe has been the place to see your neighbor, catch up on what's happening around town, or just stop-in when you're passing through. Their breakfast is the best around...as are their pies any time of day! Suffices to say, THIS is were we started our day.

Hoping to see more wildflowers, we took a northern route home - heading up US-281 to Hamilton, then TX-22 through Meridian and across Lake Whitney and into Hillsboro where we enjoyed lunch at the quaint Cotton Exchange Restaurant. The service was a little slow, but the food worth the wait.

With a front moving down, we experienced 25-30 mph wind sustained gusts the entire journey home. Seriously, I bet the bike was leaning +10 degrees into the wind. And unfortunately, the wildflowers were even more sparse along the route. But how can one complain having spent three quality days with my bride and riding my motorcycle!

All-in-all, the trip was about 800 miles. The new Ohlin Blackline 772 suspension performed flawlessly, even when the bike was fully loaded, as did the new 18" Touring Shield from Freedom Shields. Yup, I think Dusty is ready for the Great Southwest Tour...after a bath, of course.
Posted by RoadTrip at 4:57 PM No comments: