Began the Texas BBQ Tour 2017 today. The journey started out cruising the back roads, headed towards BBQ heaven...the Texas Hill Country. It is definitely spring in Texas - the young calves are staying close to their mothers, same with the newly born kids (baby goats for you city slickers). The chicken houses were in full bloom...and the scent carried for miles downwind. The famous wildflowers have already seen their better days, but the roadsides were still slightly colored. They will be scorched by the end of May, as we are already in the 90's.

My first BBQ stop was Louie Meullers in Taylor, TX. The exterior sold me, but the interior did not disappoint. 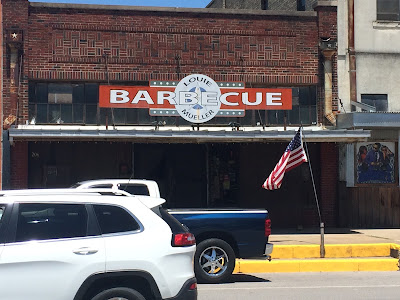 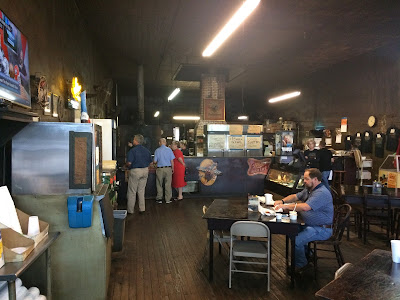 The place attracts folks from all over the United States and the world. One of which you may recognize... 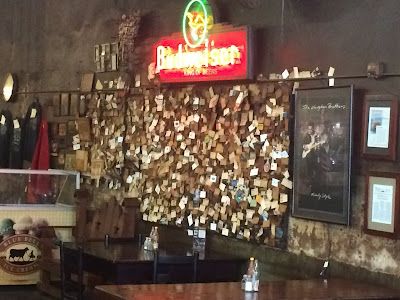 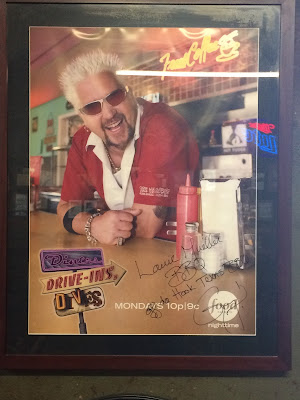 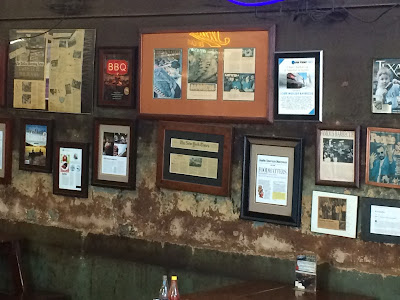 But I failed to get a pic of my selection...ate it too fast!

I ended the day in Kerrville with 370 miles on the trip odometer. It was a good day, indeed. And it ended well too! 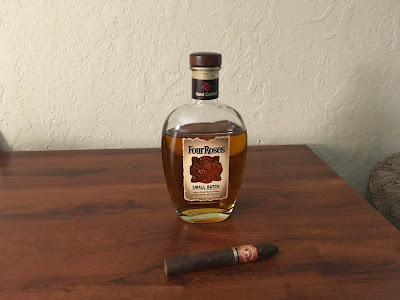 I guess I need to include a pic of the bike to qualify as a true ride report. Here is Dusty, aka The Insect Assassin. Another sign of Spring in Texas is the plethora of kamakazzee bugs, some the size of small birds! I only took a half dozen to the head...might be time for a slightly larger windshield. 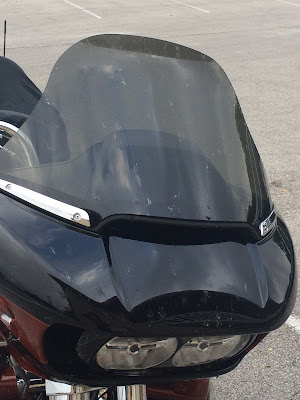 Day 2 began a little late...had to take care of some business this morning. Since I overnighted in Kerrville, I thought I would give one of the local, lesser known, joints a chance to impress. Here is Dusty anxiously awaiting her turn in line... 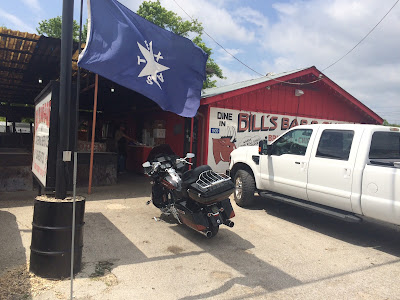 Bill's BBQ is the name and they get decent ratings on TripAdvisor. I tried the three-meat platter - a 1/4 pound each of brisket, sausage, and ribs - along with some baked beans and tater salad. I'm no foodie or food critic, but would rate Bill's in the middle of the pack in terms of Texas BBQ. 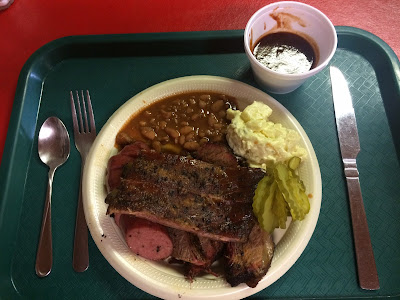 The owner is doing his part to clear the roads of deer and other vermin. All four walls in the seating areas were lined with mounts and tons of pics of successful hunts. 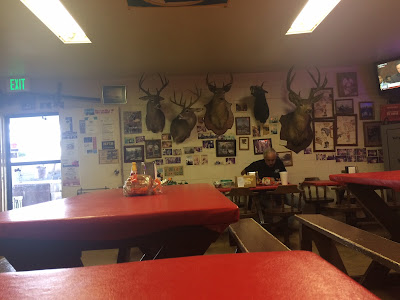 With my belly full, we began a little cruise along TX-39, a tree-canopied road which criss-crosses along the banks of the spring-fed Guadalupe River. After a few miles, I could sense Dusty was getting a little sleepy from the full stomach and warm sunshine, so we stopped at one of the bridge crossings to take in the sights and rest. 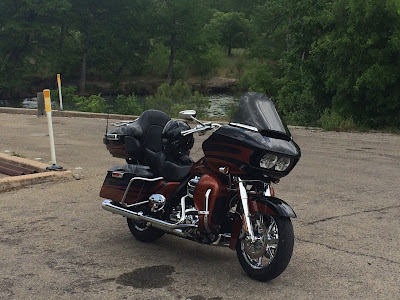 On the other side of the bridge was a nice waterfall... 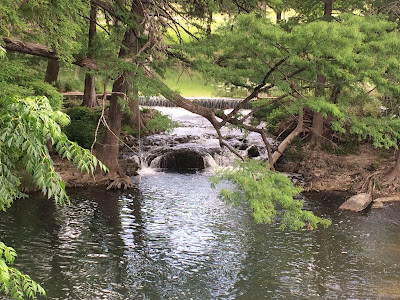 And the natural tree growth was kind enough to double the view. I have been known to wear swim trucks under my riding clothes and take a little dip on a hot summer day at this very spot. But not today...and you wouldn't want to see that pic anyway! 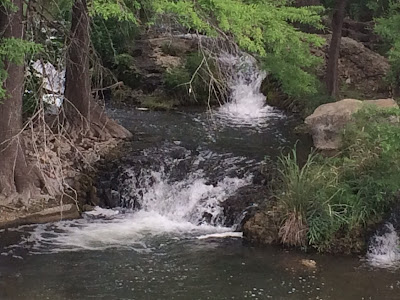 A little further down the road was an interesting set of fence post decorations on both sides of the road... 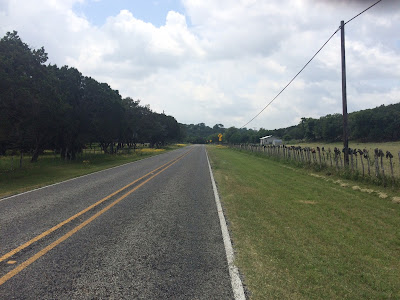 Here is a zoom-in shot...call it original Texas recycling. Or maybe the PC term is "re-purposed". 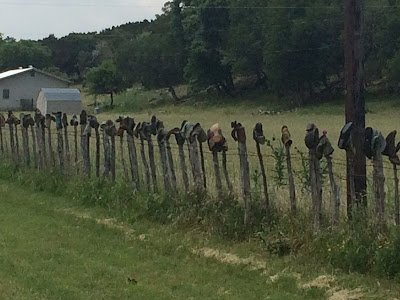 I rode TX-39 west to US-83, then south to Leakey (pronounced LAY-key) and stopped in at the Bent Rim Grill (also known as the Frio Canyon Motorcycle Stop) for a cold adult beverage. The place as a dog-run style seating area where you can catch a cool breeze on the hottest of days. They also have a wall of shame... 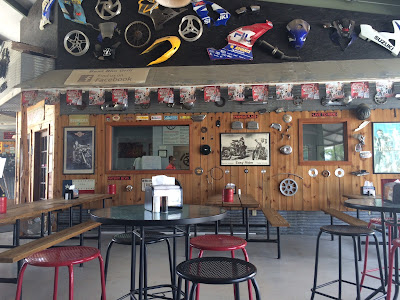 And a pretty dry sense of humor... 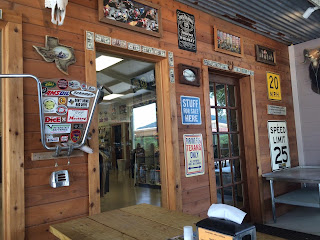 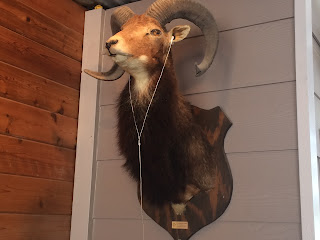 The primary reason motorcyclists come to this remote area of Texas is the Three Twisted Sisters, perhaps the best combination of motorcycle roads in the state. The Sisters include FM-335, FM-336, and FM-337 which offer a wide range of twisties, elevation changes, and scenic views. Several sections of the roads cut through the hills, giving us kids an opportunity to the throttle a couple of extra VROOM, VROOMs just to hear the echo back. These roads are packed on the weekends, but not so much during the week.

Today was a very peaceful ride...probably rode 50 miles without seeing another vehicle. Being in that isolated of an environment certainly puts things in perspective. We are but one of God's little creatures roaming this Earth.

Hope you are enjoying the ride! 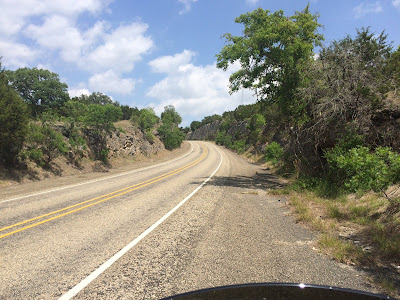 I met a business associate/friend for lunch today in Boerne (pronounced BUR-nee). In keeping with the theme of the trip, I selected Klein's Smokehaus as the venue. Klein's speciality is smoked meats and processing game for the many hunters in the area. And they do a little Q on the side. Very good Q, I might add. The po'boy brisket sammich must have weighed a full pound and was delicious. The only seating available is on the sidewalk, so we ate al fresco. No pics, but it did happen.

I arrived in Boerne a little early, so I stopped in at Mission City Indian Motorcycle to check out the new Chieftan Limited and Chieftan Elite. I really liked the Elite. I'm the curious sort and rode several Indians a few weeks ago at a Demo Days event. Out friends at H-D have some serious competition, but I think there is room for both brands to do well. 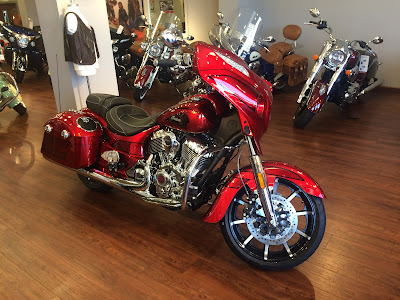 After lunch, I tool the back roads to Lockhart, a little town SE of Austin. Lockhart is the county seat of Caldwell County and, more importantly, is the home to two of the best BBQ joints in Texas - Kruez Market and Black's. The early German settlers definitely made their mark on the Texas Hill Country and Central Texas, especially in the areas of architectural influence, quaint country churches, farming, and smoked meats. Here is a sample of the courthouse architecture. 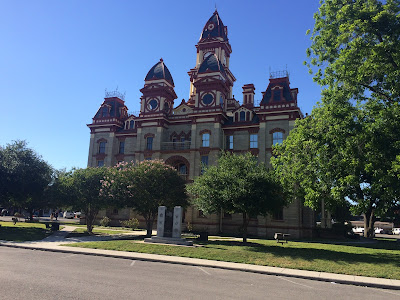 Decisions, decisions. What should I ear for dinner? How 'bout more BBQ? I chose: 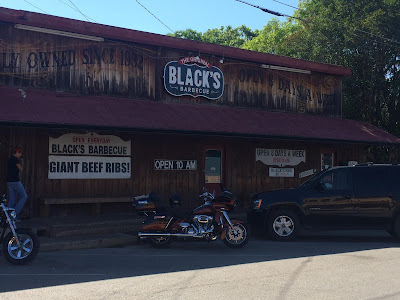 Black's is family owned and has been in continuous operation for 84 years, so they must be doing something right. And after sampling the brisket and garlic sausage, I hereby proclaim Black's as my favorite BBQ of the tour! 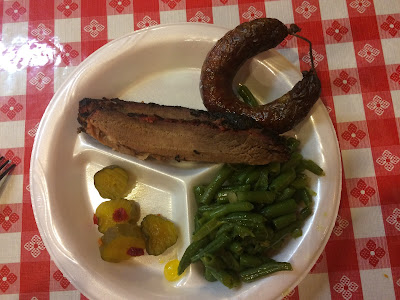 The walls are plastered with game mounts, press clipping, awards, and pictures of their community involvement over the years, such as sponsoring Little League Baseball teams...the sort of things that generate 84 years and multiple generations of loyal customers. THIS is what makes America great. 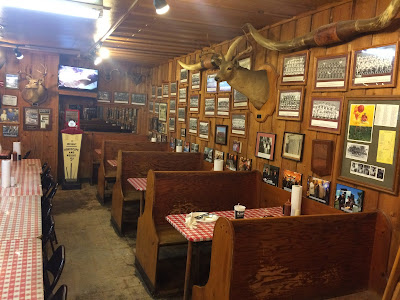 All good things must come to an end and so it is with my Texas BBQ Tour 2017. With a full belly, I pointed Dusty towards East Texas and began the long journey home. I stopped at Buc-ee's (perhaps the world's largest gas station) and couldn't resist capturing Disty's trophy shot. She definitely lived up to her Insect Assassin moniker. I arrived home safe and sound at 10:30p...with the belly still full.

Oh, and that bottle of Four Roses is gone now too. Thanks for keeping me company on the adventure!

Now that my digestive tract has processed all of the beef and pork consumed, my brain can finally start thinking about what made this trip special.

The weather was perfect and the 941.9 miles of roads outstanding. The food was obviously great and the hotel accommodations (Best Western Sunday House in Kerrville) were adequate. It was my second long distance solo ride. Better than my first, but I still much prefer to have my bride of nearly 37 years along (she was doing her annual vacation with her sisters).

I didn't post about the people I met along the way, but they are what really made the trip special.

Like the guy from Denton, TX riding a BMW adventure bike. The thing was a little beaten-up looking and had stickers from all over the world where he had ridden. Like his multiple trips to Prudhoe Bay, Alaska (yes, multiple). And from Texas down to the southern-most tip of Latin America. And from China across Russia into Eastern Europe. And all around New Zealand and South Africa. he was not a wealthy man, just determined with a great sense of adventure. He'd never been out of Texas until 2002.

Or the fun couple from Angleton, TX on the GoldWing who are relatively new to motorcycling (started in 2015). The own a small logistics company and work too much, but play hard too. With retirement on the horizon, they find motorcycling together a great way to put their life into perspective.

Or John, a recently retired pastor from San Antonio who lost his wife to cancer a year ago. He doesn't hesitate to jump on his 2008 Ultra Classic and ride to Arizona or Las vegas to visit (or help) friends. At 63, he'd full of life and healthy. He's still mad at God for taking his wife, but understands tehre is a higher power at work and is finally ready to share life with someone again...but she has to ride!

And there were countless others who shared a brief word or lustful glance at Dusty.

I made a conscious effort to slow down on this ride. Not speed, but pace. To take pics...to really see the trip, not just push through it. I also made it a point to talk to people, whether it was at a rest stop, while eating, or sitting around the pool at the end of the day, or just holding a door open for someone and striking up a light conversation. And out of respect for growing the riding community, to complete the ride report. It didn't happen if you don't write the ride report.
Posted by RoadTrip at 4:01 PM No comments: